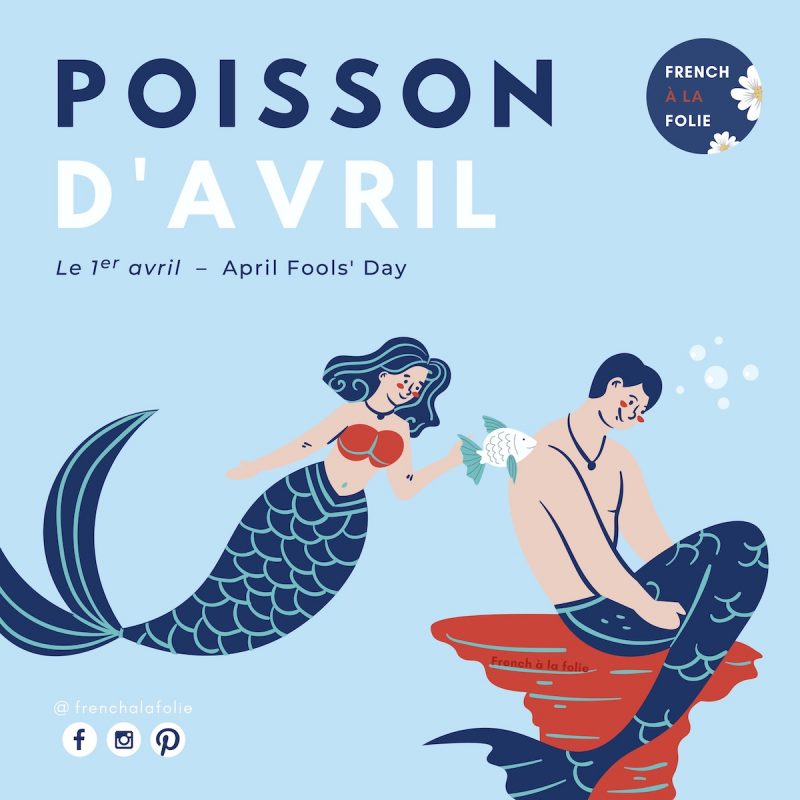 On est le premier avril ! This means we’re all about the Poisson d’avril. ? Find out how April Fools’ Day is celebrated à la française et en français and pick up crucial vocabulary!

First of all, pranksters, rejoice! For le 1er avril is much like its English counterpart, April Fools’ Day! And just as many anglophones delight in jokes and pranks on April 1st, many francophones will happily join in with poissons d’avril.

Pranks and poissons… for all!

The classic poisson d’avril (April Fools’ prank) is the one you’ll see many francophone children giggling over. It involves cutting out a paper fish and secretly sticking it on someone’s back. When that unsuspecting person realizes he or she has been tagged, the pranksters will then shout, “Poisson d’avril !” before scarpering. Simple, cute, classic.

But while paper fish are the domain of children, don’t think that the adults sit this one out! In fact, in France and other francophone regions like Québec, Belgium, and Switzerland, many grown-ups will go all-out during this prank fest! Examples of their playful machinations include bogus headlines published by media outlets and elaborate marketing campaigns designed to make you do a double take or think twice!

➡️ Psst! Check out the bottom of this post for examples of some famous poissons d’avril. Some of them are very clever!

How did this tradition begin?

Admittedly, the history of pulling pranks on le 1er avril is, at best, speculative. Nevertheless, the story that’s most often cited takes us back to 1564 when the French King, Charles IX, standardized the French calendar.

By selecting January 1, Charles IX sought to eliminate the bureaucratic headache of regional differences in the start date of the new year. However, pockets of resistance existed and some people continued to celebrate and exchange New Year’s gifts during their preferred time. (One such time was at the end of March or early April.) So, to mock these stubborn individuals, others started pranking them with fake gifts, thereby creating the tradition of playing practical jokes on April 1st!

But what’s with the fish?

Good question. The April Fish seems to live in equally murky waters with its uncertain origin story. However, a number of interesting theories exist…

One theory involves the Christian celebration of Lent, or le Carême, when meat is forgone in favor of fish. Another one links the fish to the zodiacal sign Pisces, which covers late February to late March. And yet another has to do with the fishing season. Because fish often spawn and replenish their numbers in April, fisherman were supposedly banned from catching anything during this period. So people started giving them faux fish as a form of consolation.

Now, which is true? Is it a combination of the above? Or are they all false and part of the longest-running poisson d’avril known to man? Sadly, we may never find out. But don’t let that stop you from picking up valuable vocabulary related to this annual event!

If you’re an intermediate or advanced student, it’s also worthwhile to note the following:

Pranks from Years Past

Finally, remember what I said about francophones taking le 1er avril pretty seriously? Here are some examples of past poissons d’avril to give you an idea of the shenanigans you can expect on this day!

PRO TIP
Looking for witty and creative examples of marketing in French? If you love puns, as many francophones do, check out Monoprix’s product packaging as it’s loaded with them! It’s also a good way to pick up advanced vocabulary and expressions while having fun!

But we can do even more with fish!

It turns out the word poisson is also a great way to teach French! Check out this Vocabulary Inception Series post to discover how phonetics, spelling, and related terms can be woven into a single French lesson on one word!

Got that Poisson d’avril vocabulary down pat? Looking for more vocabulary lessons?

Find all my posts on French vocabulary right here! Packed with memorable graphics and designed to help you master those tricky noun genders, my lessons will make learning easier and show you the FUN in French!