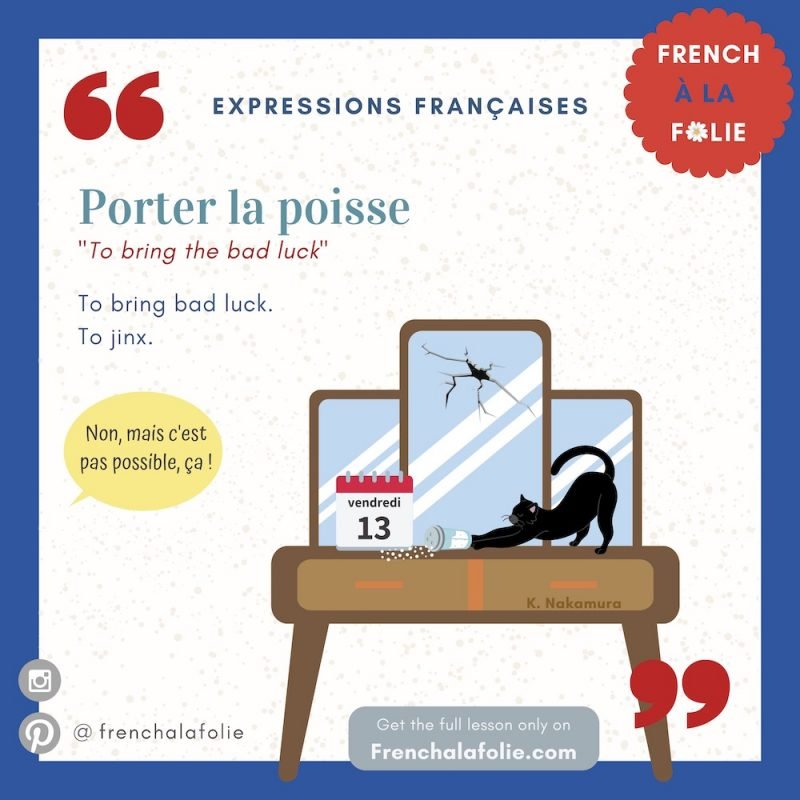 Most of the time, we’re thankful for Fridays. However, sometimes, like today, Friday falls on the 13th, making it un vendredi treize and a day of sheer panic for the superstitious. So, on this Friday the 13th, let’s talk about bad luck and the French expression, porter la poisse. Find out what it means, how to use it, and learn about related expressions! Here’s your comprehensive guide…

To bring the bad luck.

If you’re wondering where the odd-sounding la poisse [la pwas] comes from, just so you know, it’s not le poisson (fish)! Instead, it comes from la poix, which is a sticky glue made from pine resin. This tar-like substance was used to waterproof and seal the undersides of boats, and the action of smearing it on something became the verb, poisser. This, in turn, gave us the deverbal noun, la poisse, or bad luck.

So what does la poisse have to do with misfortune? People observed that, once applied, this viscous material became incredibly difficult to remove. I daresay it likely made a giant mess too. (If you’ve ever accidentally stepped in tar and tracked it everywhere, you’ll know what I mean!) These troubles were then associated with the belief that bad luck “stuck” to people, following them around and ruining their lives. Therefore, something that brings la poisse is something that could create a very “sticky situation,” or even lead you to a “sticky end,” as we might say in English. In other words, la poisse invites trouble.

Porter la poisse is an informal expression. In a formal setting or in formal writing, you should use porter malheur.

To say something brings bad luck to someone, use the structure: porter la poisse à quelqu’un (examples: à Tiger Woods, aux équipes, aux Français, etc.). This also means you can use les COI—me, te, nous, vous, lui, and leur—as demonstrated in the third example below.

The expression can also be used reflexively: se porter la poisse. This means to bring bad luck upon oneself or jinx oneself. (See the fourth example below.)

The keyword is la poisse and there are other ways to use it:

Are you feeling lucky? Looking for MORE French expressions like Porter la poisse?

Got you covered right here! Deepen your French the fun way and impress your francophone friends by picking up French expressions!