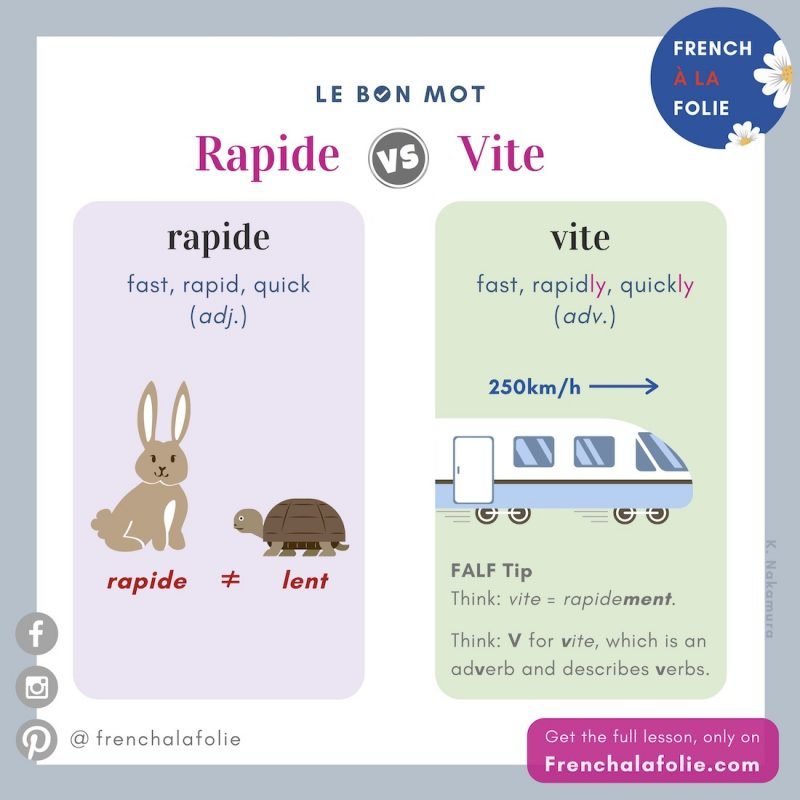 Not so fast! Rapide ou vite ? Ahh, the infernal duo. The bane of French students everywhere, causing them to hang their heads and press their temples in agony and despair. But not anymore! Today on le bon mot, we’ll examine this problematic pair until you can see the glorious daylight between them. Find out why people mix them up, which one you should use, and how to remember the difference!

What’s the deal? For anglophones, I suspect the confusion around rapide and vite stems from the handy-but-ill-advised translation for both words: “fast.” But not so fast. They’re not the same thing!

“Fast” is a problematic translation for learners because it can have two grammatical functions in English: it can be an adjective or an adverb. (It can also be a noun or a verb, if you consider its second meaning, which is to abstain from eating.) For this reason, I suggest tossing it to the back of your mind until you have a better handle on rapide and vite.

So which French word is which? And are there translations that better highlight the difference? Here’s the definitive guide.

Get the Basics Down

⭐ EXCEPTION: When talking about athletes, or if you’re in Québec, vite can be an adjective. However, these are special cases. If you’re a beginner, your priority should be mastering the adjective/adverb distinction.

Think: V for Vite, which is an adVerb, so it modifies Verbs.

Think: rapide vs. rapidement (rapid vs. rapidly). Vite is a synonym of the adverb rapidement.

?PRO TIP
If you’re hesitating between rapide and vite, check if your sentence makes sense with rapidement. If it does, then you can likely replace it with vite. Otherwise, you’re probably dealing with rapide.

Reinforce the grammar with common expressions that demonstrate this distinction.

Know Where They Go ?

For intermediate and advanced students, mastery of this subject will also depend on your ability to place or locate these words in a sentence.

⚠️ Finally, don’t be tempted to say vitement! Vitement does exist, but it’s no longer in use and would sound odd. Banish it from your vocabulary!

Mastered rapide and vite ? Looking for more astuces to improve your French?

Like many of you, I’ve had to get creative and invent hacks for remembering confusing things in French! HERE are the strategies and techniques I’ve come up with or learned over the years. Fast-track your French with these top tips!