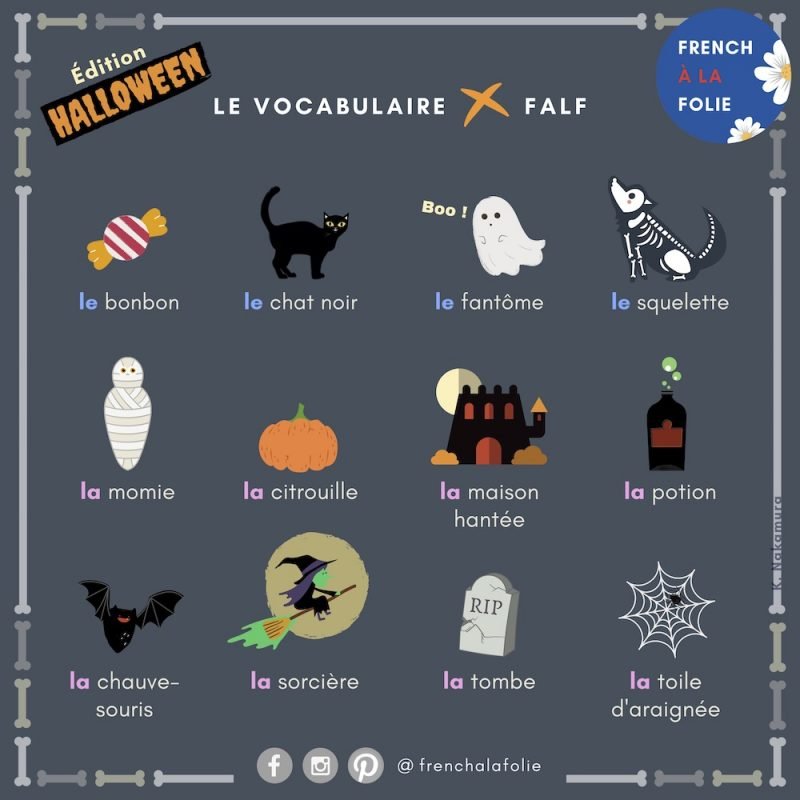 BOUH ! On est le 31 octobre, alors on se met dans l’ambiance d’Halloween ! To celebrate all things spooky on the spookiest day of the year, let’s load up on the culture and learn some French Halloween vocabulary!

First things first: if Halloween was a big part of your childhood, then it bears mentioning that it’s still a relatively recent import to most francophone countries. Consequently, it’s something that conjures up mixed emotions.

In France, Halloween (pronounced ‘ah-lo-ween) is often scorned for various reasons: its pagan origins, foreign influence, highly commercial nature, and the focus on sweets, just to name a few! There’s also the consideration that, traditionally, All Saints’ Day (La Toussaint) was the primary event this time of year. (By the way, did you catch it? Tous + saint = All saint.)

Nevertheless, Halloween has picked up in popularity over the years, especially amongst the younger generations. So for the language learner looking to discuss these festivities with francophone friends, the end of October presents a great opportunity to learn French Halloween vocabulary!

But before we get to the vocab, let’s quickly address the name itself. Is it Halloween or l’Halloween? The answer to this question falls along regional lines.

How did this difference come about? According to the OQLF, it’s a question of how and when Halloween was introduced to the two regions. In France, it was introduced by the Americans as “Halloween” and remains a pretty alien concept. But in Québec, the word and the event itself have had much more time to seep into the culture; hence the adoption of the definite article and the creation of expressions like Passer l’Halloween (to go trick-or-treating).

Find all my posts on French vocabulary right here! Packed with memorable graphics and designed to help you master those tricky noun genders and spellings, my lessons will make learning easier and show you the FUN in French!